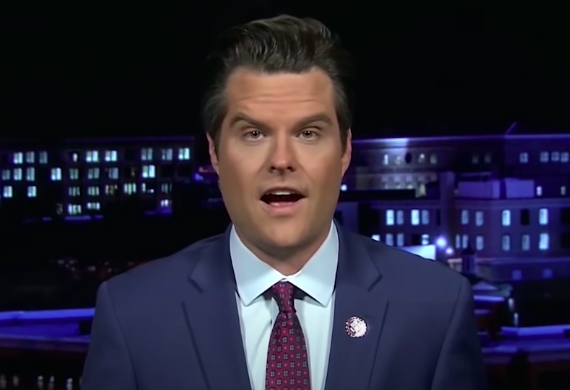 Summer is officially here and we bet there’s nothing Matt Gaetz would rather do more than sit poolside with a piña colada in one hand and an underage girl in the other. Unfortunately for him, it’s looking increasingly more likely that his summer will be spent inside a jail cell.

The embattled congressman continues to do everything he can to distract people from that whole ongoing child sex trafficking/obstruction of justice federal probe he’s wrapped up in. His latest strategy has been to suggest the FBI was in on the January 6 insurrection on the U.S. Capitol.

The other day, Gaetz, who opposed the 1/6 commission, went on Newsmax to accuse the FBI of withholding information about the deadly riots.

“Why is there not more transparency?” he asked. “What did the FBI know? And when did they know it?”

Then, without providing a single shred of evidence, he accused the bureau of being infiltrated by “a bunch of folks in Washington, D.C., who are addicted to the coverage that they receive from The New York Times, The Washington Post, and CNN.”

“We see an FBI and Department of Justice that, I think, has strayed from its original mission and now they’re engaging as political actors.”

“I do not think we are dealing with a small group of bad apples,” he added. “I think that the FBI has morphed into a political opposition research organization and a political activism organization more than a law enforcement organization.”

We’re sure Gaetz’s attacks on the FBI and DOJ are entirely about his concerns over bad actors within the organizations and that it has absolutely nothing to do with the fact that multiple media outlets are now reporting federal prosecutors may bring charges against him very, very soon.

Sources told ABC News that prosecutors believe a decision about whether or not to bring charges against Gaetz could come as early as July.

Sources said the probe into the congressman has ramped up in recent weeks. Investigators have started interviewing more women who were allegedly introduced to Gaetz through Greenberg, who last month pleaded guilty to sex trafficking a 17-year-old girl — who later went on to work in pornography — and introducing her to other “adult men.”

Since May, a new round of target letters and subpoenas in the wide-ranging investigation have been sent out, ABC News has learned.

Gaetz has denied any wrongdoing.

Seems like you’re trying to discredit them… any particular reason?

Do you really expect us to sit here and pretend this has nothing to do with the FBI investigating you for sex trafficking?

Our nation’s premier law enforcement organization certainly hopes you didn’t sex traffic teenagers, but they have to find out. #GaetzForPrison

Funny how you keep hitting on the FBI while you’re the subject of an active investigation. Maybe you should recuse…

We need more transparency on your venmo payments.

He’s behaving like an average criminal defendant except he’s terrible at it. I’m not sure he’ll do too well if he ends up in prison.

I agree! I think we have a right to know what they have on you with underage girls, crossing state lines etc…