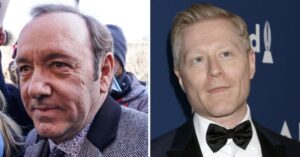 Kevin Spacey hired a professional psychologist to examine his sexual assault accuser, Anthony Rapp, who claims the 49-year-old suffers “narcissistic personality traits” and has an “excessive need for admiration.”

In legal documents obtained by Radar, the expert outlines all the reasons they believe Rapp “generated and perpetuated a false memory” about the alleged incident with Spacey.

“Diagnostically, Mr. Rapp displays narcissistic personality traits, in that he has an excessive need for admiration, has a grandiose sense of self-importance, and believes that he is special (i.e. saved his family’s life on several occasions),” the psychologist alleges.

Claiming Rapp perpetuated his allegations against Spacey because he was “apparently moved by the #MeToo movement and wanted very much to be a part of it,” the expert adds, “Openly disclosing this alleged incident that occurred with Mr. Spacey became an effective vehicle to move the movement’s spotlight onto himself.”

The medical expert says Rapp has “enjoyed the attention, praise and sympathy his allegations have given him.”

Adding that Rapp had “resentment towards closeted gay actors,” the expert claims, “Mr. Spacey was just such an actor and his tremendous success made him a focus of Mr. Rapp’s resentment.”

Upon examining Spacey’s accuser, the psychologist concludes, “Obviously, as with any civil lawsuit involving a claim of psychological damage, one cannot ignore the lure of a substantial financial settlement as a motivating factor for making such a claim either. In other words, in my psychiatric opinion, there are both external (financial reward) and internal (emotional gratification and public support) reasons for advancing Mr. Rapp’s claim against Mr. Spacey.”

As Radar reported, Rappaccused Spacey of making a sexual advance on him in 1986 when he was just 14 years old.

The actor, along with one other male, sued Spacey for sexual assault in September 2020.

These aren’t the only allegations made against Spacey.

After Rapp came forward with his allegations against the American Beauty actor, Spacey offered an apology but insisted he “does not remember the encounter.”

In his statement, Spacey said, “But if I did behave then as he [Rapp] describes, I owe him the sincerest apology for what would have been deeply inappropriate drunken behavior, and I am sorry for the feelings he describes having carried with him all these years.”