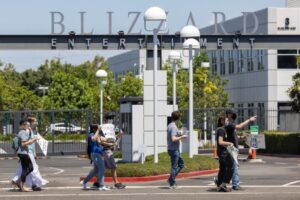 Washington (AFP) – More than 20 employees of “Call of Duty” maker Activision Blizzard have “exited” the gaming giant, the company said in a staff email, following accusations of sexual harassment and discrimination against women.

In August, the California-based videogame maker had promised a review of its practices following employee walks out over management’s initial dismissal of a state lawsuit that described a “pervasive frat boy workplace culture”.

The Financial Times reported Tuesday that more than 20 employees had been fired, including game developers and a few supervisors.

Activision also said it would expand its compliance team as it fields an increasing number of complaints and aims “to build a more accountable workplace and culture”.

Reports could be filed anonymously, the company said in the staff email, adding it would “not hesitate to terminate or discipline” anyone found violating its policies.

Activision’s latest shakeup comes amid growing complaints about the treatment of women in the gaming industry in recent years.

According to the ongoing lawsuit filed by the California Department of Fair Employment and Housing, women make up only about 20 percent of Activision’s staff and “very few women ever reach top roles at the company”.

In addition to reviewing workplace conditions, Activision has pledged to examine its depiction of women in its popular games.

The US Securities and Exchange Commission launched a separate, federal investigation last month into whether the company had properly disclosed harassment and discrimination claims to investors.

That same month, Activision and the US Equal Employment Opportunity Commission (EEOC) reached an agreement over settling claims, with the company to pay $18 million into a compensation fund.