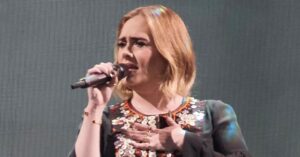 Adele is facing major backlash for canceling her Las Vegas shows with angry fans demanding the singer reimburse them for their hotels and plane tickets because she only gave them a 24-hours’ notice.

According to Daily Mail, the 33-year-old Rolling in The Deep artist’s irate fans are demanding refunds for not only their concert tickets but also for their Vegas stays and flights because she postponed her shows last minute.

Many claim they flew in from not only other states, but also from places like Canada, Mexico, and the United Kingdom. There are also reports that many of Adele’s excited fans were in mid-air when they found out about the cancelations, leaving them stranded in Sin City outraged and disappointed.

“It’s not great for Adele and I think she knows it,” PR expert Mark Borkowski told the outlet regarding Adele’s current situation. “Her response seemed very authentic. I guess it’s down to whether the fans believe her word.”

Others have also pointed out how ticket prices were anywhere from $85 to $12,000, but if the singer postpones the shows to a later date rather than cancel, these ticket holders may not be reimbursed. They’ll have to rebook flights and hotel rooms a second time for whenever the new dates are announced.

“I know I will not be able to get off of work to come back, I know I wouldn’t be able to afford to come back,” a fan from South Carolina said about the likely postponement of the shows. “This trip has been a collection of Christmas and birthday gifts plus saving for myself.”

“We lost a large sum of money on plane tickets and hotels to come see her for nothing, pretty unacceptable that a multi-million-dollar production team could pull the rug on the people who flew and risked getting Covid to see her because her ‘show’ wasn’t ready,” another angry fan from Canada told the outlet.

“She is known for her voice not for her performances, for all I care I would’ve just enjoyed her sitting on a bench singing. Absolutely unacceptable, they have not mentioned anything about compensation for the travel expenses we had.”

As Radar previously reported, the Easy On Me singer broke down crying on camera on Thursday as she announced to her nearly 48 million followers and fans that she was canceling the debut weekend of her Las Vegas residency shows.

“I’m so sorry but my show ain’t ready,” she said, seemingly knowing how disappointed and upset her fans would be.

“It’s been impossible to finish the show. I can’t give you what I have right now.”

But while the singer claims the show had to be canceled due to COVID-19, and although that might be part of the reason, Radar has recently learned that she pulled the plug because she was being a diva and didn’t know what she wanted creatively.

“Adele postponed her residency due to ‘COVID’ which is true,” a source familiar with the situation recently spilled. “But really she just hates all the creative, also she keeps changing the run of the show.”

“Crew is working literally 18 hours a day in Vegas. She just won’t stop adding and taking things away.”