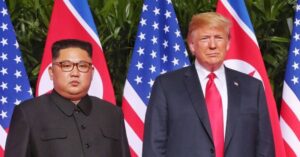 Ex-President Donald Trump’s legal team was warned by the National Archives that a number of official White House documents were still missing, including a correspondence between Trump and Kim Jong-Un, RadarOnline.com can confirm.

In a shocking development to come as Trump’s legal team continues to battle the Justice Department over the classified documents taken from Mar-a-Lago during the FBI’s raid on the property in August, a letter released by the Archives on Monday shows Trump’s team was warned about missing documents as early as May 2021.

According to the letter, National Archives and Records Administration general counsel Gary Stern informed Trump’s legal team that “roughly two dozen boxes of original Presidential records” had still not been returned to NARA as of May 6, 2021.

Included in the missing records was an “original correspondence” between Trump and Kim Jong-Un from Trump’s tenure as president, as well as a letter former President Barack Obama left for Trump during the presidential transition in January 2017.

Maggie Haberman, who interviewed Trump for her new biography of the former president, Confidence Man: The Making of Donald Trump and the Breaking of America, claimed that Trump once boasted to her about the “great things” he obtained during his time as president – including the Kim Jong-Un letters.

“No, I think…that’s in the archives, but most of it is in the Archives,” Trump reportedly told Haberman when asked specifically about his correspondence with the North Korean dictator. “But the Kim Jong Un letters, we have incredible things. I have incredible letters with other leaders.”

As RadarOnline.com previously reported, NARA was ultimately forced to visit Mar-a-Lago in January 2022 to recover the 24 boxes of White House material believed to still be in Trump’s possession – although NARA only successfully recovered a total of 15 boxes.

“In mid-January 2022, NARA arranged for the transport from the Trump Mar-a-Lago property in Florida to the National Archives of 15 boxes that contained Presidential records, following discussions with President Trump’s representatives in 2021,” the Archives said in a statement at the time.

“Former President Trump’s representatives have informed NARA that they are continuing to search for additional Presidential records that belong to the National Archives,” the statement added.

The remaining missing records were subsequently referred to the Justice Department in May 2022, which resulted in the raid on Mar-a-Lago by the FBI on August 8.

The FBI ultimately recovered an additional 33 boxes of material and records, including more than 100 classified White House documents and 48 empty folders marked classified.

A copy of the search warrant used to raid Trump’s Palm Beach, Florida home later revealed the former president is currently under federal investigation for the “removal or destruction of records, obstruction of an investigation, and violating the Espionage Act.”