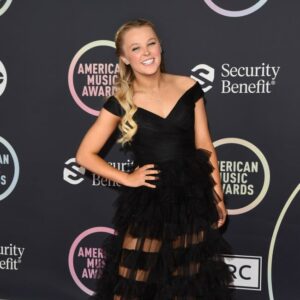 The 19-year-old star recently slammed Candace for her comments about “traditional marriage” as she highlighted the fact Christian conservative network Great American Family (GAF) – where she is chief content officer – won’t be featuring same-sex couples in their festive movies.

Now, JoJo has told PEOPLE magazine: “We have not [talked], and I don’t think we ever will again.”

She noted she wants “everybody to do what they want to do”, and she was angry with Candace for trying to exclude LGBTQ+ couples.

“Of course, I would want everybody to do what they want to do. But to purposely exclude someone because of who they love, that’s s*****.”

The 46-year-old ‘Full House’ star sparked backlash after explaining she left the Hallmark Channel to work with GAM, noting the latter – which was founded by ex-Hallmark CEO Bill Abbott – wanted to keep traditional marriage at the core”.

JoJo shared a screenshot of Candace’s comment and wrote on Instagram: “Honestly, I can’t believe after everything that went down just a few months ago, that she would not only create a movie with intention of excluding LGBTQIA+, but then also talk about it in the press.

“This is rude and hurtful to a whole community of people.”

JoJo – who came out as a member of the LGBTQ+ community last year and is currently dating Avery Cyrus – received support from Candace’s ‘Fuller House’ co-star Jodie Sweetin.

The actress commented on her friend’s post: “You know I love you [heart emojis] (sic)”

During her interview with the Wall Street Journal, Candace was asked if the network would feature same-sex couples in its Christmas movies.

She said: “I think that Great American Family will keep traditional marriage at the core.”

CEO Bill added about focusing on same-sex couples: “It’s certainly the year 2022, so we’re aware of the trends. There’s no whiteboard that says, ‘Yes, this’ or ‘No, we’ll never go here.’ “