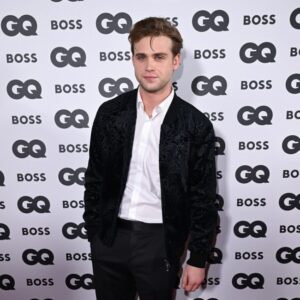 Leo Woodall was shocked into “silence” when he learned about his ‘White Lotus’ sex scene.

The 26-year-old actor stars as Essex boy Jack in the HBO comedy series set at a vacation resort and while viewers have been led to believe that the character of Quentin – played by ‘Pirates of the Caribbean’ star Tom Hollander, 55, – is his uncle, he was surprised to learn that that was not the case at all and the pair were actually due to film a sex scene together.

He said: “Well,[I didn’t know], not right when I signed on, but it wasn’t too long after that. I’d been told I might have a rumble and tumble with a couple of characters, but I didn’t know who. When I was told that Tom Hollander was playing my uncle, I was already elated. Then the news dropped about that moment and I just had about ten seconds of silence, digesting it. Tom and I were both a bit nervous, but Mike White was very light about everything, especially on the day. “

The ‘Cherry’ star went on to add that there was an intimacy coordinator on set and joked that the day was “definitely a bonding moment” but he just wanted to “mentally prepare” for going into the “best job” on television.

He told Vulture: “We were filming other things before, and he was like, “… Are you ready?” We had a really good intimacy coordinator, who took it seriously but also had fun with it. Definitely a bonding moment. The whole job was about mentally preparing to go into the best show in the world, so everything that came with it took some mental preparation. My first day of filming was actually that sexy scene with Haley. That was the introduction to this job. Quite rock and roll!

“But [Tom] is a gentleman and a true professional. There was a moment where he gave me a real boost because I was feeling very overwhelmed early on. On our second shoot day, he just sort of figuratively put an arm around me and was supportive. I’ve got a lot of respect for that.”