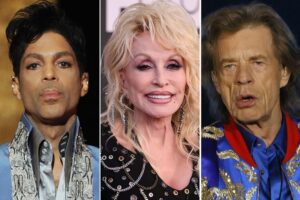 Dolly Parton has revealed a few more details about her upcoming rock album, which she decided to make after being inducted into the Rock & Roll Hall of Fame earlier this year. She’s previously said that former Journey singer Steve Perry would be heard on the LP and that she was aiming to have Robert Plant and Jimmy Page guest on a new cover of Led Zeppelin classic “Stairway to Heaven.” In a recent appearance on The Tonight Show Starring Jimmy Fallon (video below), she unveiled the record’s title and said it would also include songs by Prince, the Rolling Stones and Lynyrd Skynyrd, along with s…

See the moment Nicole Kidman graciously gave $100,000 to an HIV/AIDS fundraiser, then catch up on the latest from Gay TikTok:

A trans woman was thrown out of her hotel.

Matt’s mom introduced him to friends.

@michaelandmatt1 She about to make me play piano for them

And James got syphilis.

Olivia Colman Proud of Kit Connor for Coming Out, Slams His Bullies Olivia Colman, who plays Kit Connor’s mom in Heartstopper, called out those who “bullied” Connor into coming out as bisexual last month.

Iran has abolished its brutal ‘morality police’ after months of protest over the death of 22-year-old Mahsa Amini in custody.

Amini was arrested by Iran’s religious morality police, officially known as the ‘Gasht-e-Ershad’ or ‘Guidance Patrol’, for “improper hijab”. She later died, and though government officials claimed she suffered a heart attack, witnesses who were detained with her say she was severely beaten by police and died as a result.

Her death sparked widespread anti-government protests in Iran, and further protests across the world, with women removing their hijab, burning them, and publicly cutting their hair.

Police have violently enforced public “morality” since the formation of the Islamic Republic of Iran following the 1979 revolution, but the morality police became a separate entity from other law enforcement in the 1990s. It has existed in its current guise since 2006.

The morality police focuses mostly on enforcing laws surrounding modesty and dress for women, although it also detains Iranians for the consumption of alcohol, attending mixed-gender gatherings, and being LGBTQ+.

Assal Rad, research director at the National Iranian American Council, told TIME: “If [clothing] is too tight, if the body shows too much, if your sleeves are up, if your jeans are torn, they will take you to a detention centre… until someone comes and brings you the [appropriate clothes].”

Though she was far from the first woman to die at the hands of Iran’s morality police, Amini’s death sparked such a huge response because “it could have been anybody”, Rad said.

On Saturday (3 December), Iran’s Attorney General Mohammad Jafar Montazeri was asked about the morality police during a religious conference.

In response, he claimed that “morality police have nothing to do with the judiciary”, and that it had been disbanded.

However, there is little hope of meaningful reform, experts have said.

“This may be meant to be seen as a ‘concession’ to protesters, but it does not change the overall situation. The Iranian police, [the volunteer militia] Basij and [Islamic Revolutionary Guard Corps] are still killing protesters, and the morality police’s fate was likely sealed weeks ago. The Iranian regime will not reform itself.”

Horowitz noted that at the same time as announcing the abolition of the morality police, Iran’s Attorney General also called for more “cultural activities” to promote hijab.

“More broadly, when it comes to quelling a popular movement, false concessions are typically accompanied by real crackdowns (or expansion of pre-existing crackdowns),” he added.

In September, the same month that Amini died, two activists in Iran were sentenced to death for “promoting homosexuality”.

Zahra Sedighi-Hamadani, 31, and Elham Choubdar, 24, were found guilty of “spreading corruption on earth”, according to local human rights groups.

Amnesty International has called on Iranian authorities to “immediately quash” their convictions and death sentences, though as yet, there has been no move to do so. 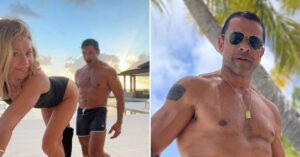 Kelly Ripa never shies away from showing off her hunky husband, Mark Consuelos, on Instagram — and it turns out fans have none other than Madonna to thank for the endless shirtless snaps!

Last month, the TV star explained on an episode of the “Everything Iconic” podcast that she purposely started posting sexy photos of her man after finding out the music icon followed her on social media.

“I immediately sort of changed everything I posted,” confessed the mother-of-three. “I started posting only shirtless photos of Mark because I was like, ‘Madonna doesn’t want to see my kids. She wants to see eye candy.’”

Nonetheless, the actor is guilty of sharing quite a few scantily clad photos himself — scroll down to see some of Consuelos’ hottest pics!

This past August, Ripa shared what she called “a thirsty reminder” to watch her game showGeneration Gap, posting this sultry snap of the Riverdale star.

“Objects may be thirstier than they appear

,” she quipped in the caption.

Pals like Lisa Rinna couldn’t help but comment on the pic, with the reality star writing, “Thank you Kelly

The Ed alum shared a cheeky post as her man worked on his tan poolside, captioning the photgraph, “Adequate sun protection?

Oh, la, la! The parents-of-three never worry whether or not their PDA embarrasses their kids, as evidenced by this suggestive swimsuit-clad shot.

Hot stuff! “#Tbt one year ago, when the air conditioner gave up, so did @instasuelos

,” the actor’s wife wrote alongside a photo depicting him sweating through his tank.

Who wears short shorts? The blonde beauty decided to get in on the fun while celebrating a pal’s special day.

thank you for letting us be a part of your new album’s cover art. Coming soon!” she joked of the trio’s poses.

A few years ago, the dad-of-three got to work on cleaning, joking he now has a “love story” with his power washer.

“I’m not sure you have to wear these glasses or flex while using but it seemed appropriate,” the former soap opera star added. “I smell a side business.” The group sponsored the rally along with organizations like Moms for Liberty, which is allied with Governor Ron DeSantis. Among other things, the administration is announcing new steps to strengthen PEPFAR, a global effort to fight HIV and AIDS.

See the moment Nicole Kidman graciously gave $100,000 to an HIV/AIDS fundraiser, then catch up on the latest from Gay TikTok:

A trans woman was thrown out of her hotel.

Matt’s mom introduced him to friends.

@michaelandmatt1 She about to make me play piano for them

And James got syphilis.

Former Tory minister Conor Burns has been cleared of misconduct after he was accused of touching a young man’s thigh in a hotel bar.

The unspecified complaint was made against Burns, a gay MP for Bournemouth West, alleging that he engaged in inappropriate behaviour during this year’s Conservative Party Conference.

He was swiftly fired as trade minister by Liz Truss on 7 October, and an investigation was launched by the Tory Party.

On Saturday (3 December), the party said that Burns had been cleared of any wrongdoing and would have the whip restored, adding: “After undertaking appropriate enquiries and reviewing all of the evidence available to establish the facts, the Party concluded that there was no basis on which to investigate further.

“The matter is now closed and Mr Burns’s membership will be reinstated at the nearest possible opportunity.”

Speaking to the Bournemouth Echo, Burns, who has consistently denied all allegations, said the past two months had been “a living nightmare, not just for me, especially for my elderly parents, for my many friends and my wider family and all those who love and care for me”.

He continued: “When you get to the point where your 80-year-old father is saying, ‘When is this going to end?’ and you spend your time reassuring everyone else you are fine when actually you are far from fine is very difficult.

“It took a toll. The people I want to pay tribute to most of all for their loyalty, their encouragement and their faith in me are my constituents in Bournemouth West.”

He added: “I knew that I would come out the other side of this and my name would be clear because there was nothing to what had happened. I knew I was innocent and the truth will out and it has.”

Conor Burns said the allegations against him were a “stitch-up” because he had expressed his support for Kemi Badenoch, now equalities minister and trade secretary, while Truss was briefly prime minister.

“I think this all had become more to do with nice things I had said about the trade secretary than about being up late at the conference,” he said.

Burns, who intends to run again as MP for Bournemouth West, added: “It felt and smelt like a stitch-up and that it what it was.”